Spengler’s Ghost informs his granddaughter of his ‘legacy’ and participates in the Ghost Extermination operation in which new and old members of Ghostbusters have joined forces. It’s a touching scene.

The songs were the first to be known in Korea. The 1980s were the era of pop songs. The two major terrestrial radio stations competed to air “American Top 40”, hosted by Casey Kasem, and Ray Parker Jr.’s song “Ghostbusters” topped the Billboard charts. Even thinking about it now, the original Ghostbusters was a horror-comedy with a twisted conclusion. The highlight scene that many people remember is probably this one. Just as Gojeo, the God of Destruction, says, “The existence you think will lead you to ruin”, Ray, played by Dan Ackroyd, inadvertently thinks of Marshmallow. A giant ‘Anpanman’ walks through the forest of New York buildings. The name of the film’s original award character is Marshmallow Man with a “Stay Puff” hat. I remember that theatrical subtitles were also called Anpanman at the time, but at that time, Anpanman (Anpanman), which was produced as an anime television show in Japan in 1988, was not known in Korea.

A sequel made after 32 years

This film is the sequel to the 1989 film

Why did Ghostbusters disappear? According to the film, the answer is that they were too “competent”. After the “incident” of 1985 and 1989, all the critical ghosts were caught and there was no more work to earn a living. The members are dispersed and separate. The number that appeared in a television commercial about 30 years ago is the number used by Ray, who runs an occult bookstore. The most successful is Winston Zedmore, a businessman who says he never forgot he was a “ghost fighter”, according to a side clip attached to the film.

Anyway, the movie is the story of Lee Gon Spengler’s daughter, who was a member of the Ghostbusters in the original episodes 1 and 2, and her grandchildren. Lee Gon Spengler, who was separated from the members, dies while living alone in a remote countryside called Summerville, Oklahoma, USA. Carly, Spengler’s daughter and raising two children alone, comes to her father’s old farmhouse to settle the unpaid rent. However, the house was old and rotten, and my father was a poor man who could barely pay even the electricity bill with the help of neighbors. Why did Spengler settle there? And what legacy did he leave to his daughters and grandchildren?

It turns out that Go-jeo, who appeared as the ultimate evil spirit in the original Episode 1, was hiding in an abandoned abandoned mine here. As the film opened, Spengler managed to trap Goze in a ghost trap, which was hidden on the floor of the house. When curious scientist Phoebe and vacationing science teacher Gary break the trap, Go-Jeo returns to the mine to cause terrible disaster. and heritage. They are ghost extinguishing devices. Although 30 years have passed, the “Ecto 1”, an improved Cadillac vehicle, is still working well. Proton packs that shoot proton beams always work with a fuse or two.

Why was it called the afterlife?

The film is full of items that will delight fans of the original Ghostbusters. I thought it was just a cameo, but when Phoebe and her brother Trevor, and Trevor’s girlfriend Lucky and Phoebe’s best friend podcast (judging by the credits, a boy named Logan Kim seems to be of Korean descent) weren’t enough, the former Ghostbusters all came to the scene to help in the fight against

But isn’t Spengler already out of this world? Spengler’s Ghost informs his granddaughter of his ‘legacy’ and participates in the Ghost Extermination operation in which new and old members of Ghostbusters have joined forces. It is a touching scene that reminds us of the afterlife that is attached to the English title of this film.

The film was directed by Jason Reitman, whose father was Ivan Reitman, who directed the original Ghostbusters 1 and 2, Twins (1988) and Little Pig Dave (1993).

Controversy over “misogyny” surrounding the 2016 remake version of 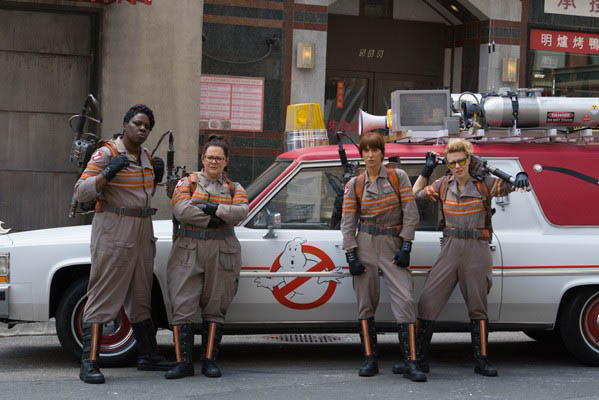 Although this film is the third in the series, there is actually one more. This is a 2016 remake (pictured). In the film, Bill Murray, who starred in the original film, plays Dr. Martin Heiss, a professor of paranormal revelation who denies the existence of ghosts, rather than team leader Peter Bankman. In this remake, featuring famous actresses, the original ending song by Ray Parker Jr. was also arranged in a female vocal version, but it flopped at the box office (I remember seeing them together at the theater) .

Why did the film fail? There were a lot of debates. The first thing that became controversial was star terrorism. Even before the film’s release, netizens who criticized the remake featuring these female protagonists collectively gave the Internet Movie Database (IMDB) low ratings. While the number of “dislikes” rather than “likes” in the YouTube trailer was overwhelming, comedian Melissa McCarthy, who starred in the film, said the person who had perpetrated these star attacks was “a very, very misogynistic person. Very few people,” he claimed in a media interview. Christine Wick, who played Dr. Erin Gilbert, also said in a media interview: “The reason why there were a lot of bad reviews on the film is because we were women. The controversy did not subside even after the film’s release. The ” Jori Turn” via Twitter focused on Leslie Jones, who emerged as a black female character. In the end, even director Paul Pig (not a female director, but a male born in 1962) exploded on Twitter saying: “It crossed the line.”

Allu Arjun asked for a special puja from top astrologers. The teaser of Puneeth Rajkumar’s latest film, James and many more

New movies this week: Death on the Nile, Marry Me, Blacklight

‘No’ Director Jordan Peele Reveals Why He Doesn’t...

See the first photo of Brendan Fraser as...

Why Daniel Kaluuya says ‘no’ is ‘very special’

‘The Walking Dead’: Steven Yeun filmed for a...