Designers have now found their place in fashion films because it allows them to communicate their ideas more effectively. Recently, designer duo Abu Jani and Sandeep Khosla showcased their new collection through a film Beyond the Light starring dancer Shantanu Maheshwari.

On an award-winning spree for his stellar debut in Sanjay Leela Bhansali’s Gangubai Kathiawadi, Shantanu Maheshwari has now starred in Abu Jani Sandeep Khosla’s Beyond the Light. After essaying the role of Afshan in Bhansali’s directorial, the starboy now stars in the role of the Prince of Darkness in a mesmerizing story that combines delicious fashion with a deeply spiritual message that celebrates the triumph of good over evil. Beyond the Light, a recent fashion film by Mumbai-based designers Abu Jani and Sandeep Khosla, is narrated in the voice of Sukanya Chattopadhyay. Poet Amir Khusrau’s Zehaal-e-miskeen is integrated with the expressive notes of the singer.

Ever since it was released on YouTube, Shantanu’s fans have been ecstatic after seeing what he added to the film. The heartthrob is seen rocking looks that have the signature elements of the two prolific designers. Everything has its own charm from the net jacket with bold geometric gold borders in hand zardozi embroidery teamed with a fancy 8 layer skirt in black mul mul accented with gold laces, zardozi embroidery borders and tassels. 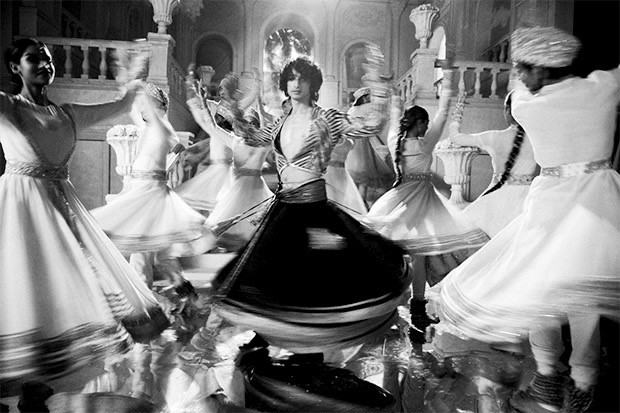 The color palette also evolves with the story. The designers explain that colors play a vital role, starting with ivory and off-white, progressing to pastels (with unusual flashes of lime green and pink) and finally to darker jewel tones. “The film also explores the multitude of moods and emotions represented by one color – black,” they add. When Maheshwari, who plays the ‘Prince of Darkness’ takes to the screen, he is dressed in black with gold glitter, wearing a zardozi bordered cropped jacket and paired with a heavily padded mul mul skirt with lace detailing. As the Prince is transported to the “good” side, he appears in all white, cloaked in a whirling dervish-like cloak, before entering the Sufi-twirled “dance of joy” that marks the end of the film and the proverbial victory of good over evil.

Shantanu Maheshwari says, “Firstly, working with Abu Jani and Sandeep Khosla Sir is not something I had ever imagined. They are legends in the truest sense. I admire their creations and how they have brought light to Indian fashion globally. Beyond The Light drives the narrative through expressions, dance and costume. I’ve never played a delightfully dark character, and they had faith and trust in me to pull it off.”

Shantanu’s film is a rich, mystical story that travels between Heaven and Earth and enchants the physical senses as well as the soul. A multi-layered feast for the eyes and the spirit, it is ultimately a powerful lesson that explores the collective human spirit’s ability to overcome darkness and embrace the divine within us and each other.