The remake of the Tamil blockbuster Vikram Vedha, which will bring Hrithik Roshan and Saif Ali Khan together for the first time on the big screen, will hit the screens soon. The actors started their promotions and recently on-screen Vikram aka Saif Ali Khan was spotted visiting The Kapil Sharma Show along with some cast members which included Radhika Apte, Satyadeep Mishra, Sharib Hashmi, Rohit Saraf and Yogita Bihani. The actors were seen having a fun conversation and were also athletic enough to play an interesting fruit balancing game.

In the recently released promo of the show, Kapil Sharma was seen welcoming his cast Vikram Vedha. During his interaction with the Race star, the comedian-host asked about the clothes being designed at the House of Pataudi. For the uninitiated, Saif has launched a new Indian ethnic wear brand called House of Pataudi. The curious host wondered if the brand sells clothes that only Pataudis wears? Saif Ali Khan responded in his quirky style by adding, “Nahi sab naye kapde milte hain aur jo nahi bikta hai woh main pehen leta hoon. (No, you get all the brand new clothes and the ones that don’t sell, I end up using them).” His funny comment left everyone in splits. 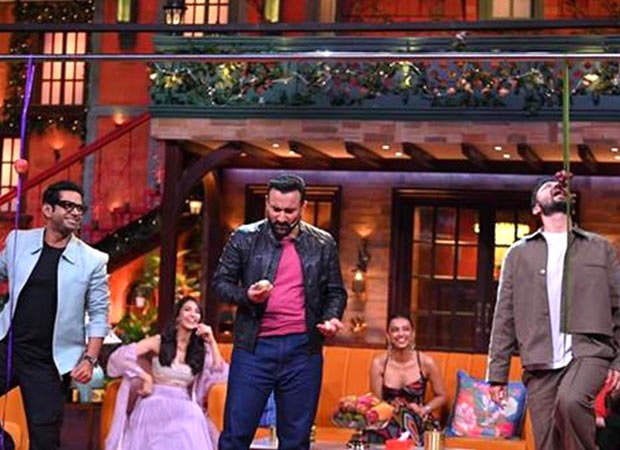 Apart from this, actors Saif, Sharib and Satyadeep will also be seen playing a fun game called ‘atpata’ a fruit balancing game. In this game, the fruits will be tied on a ribbon and the ribbon will be tied on their feet. Actors will have to balance the ribbon with their feet while trying to take a bite out of the fruit tied on it. During the same time, Saif showed his humorous side once again as he joked about the chiko they gave him, saying it tasted more like a potato, adding another ROFL moment to the show.

I am coming in Vikram Vedhathe Pushkar-Gayatri directorial is slated to release on September 30.

The young actor premieres a new film at TIF