Home » What’s the secret to filming underwater scenes in “Avatar 2” that are more real than real? : Weekly Donga
Korean

What’s the secret to filming underwater scenes in “Avatar 2” that are more real than real? : Weekly Donga

A scene from the movie ‘Avatar: Road to Water’, which grabs attention with its innovative computer graphics technology. [월트 디즈니 컴퍼니 제공]

Director James Cameron took us to the fantastical planet of Pandora in the movie ‘Avatar’ 13 years ago. At the time, it only took three years to shoot, and a big budget of $350-400 million (about 450-514 billion won) was invested. It introduced splendid computer graphics (CG) technology and caused a sensation at the global box office. The recently released sequel “Avatar: Road to the Water” (hereinafter referred to as Avatar 2) is also rated as breaking new ground for CG with advanced graphics and visual effects. This film is very difficult, especially since it takes place in water. 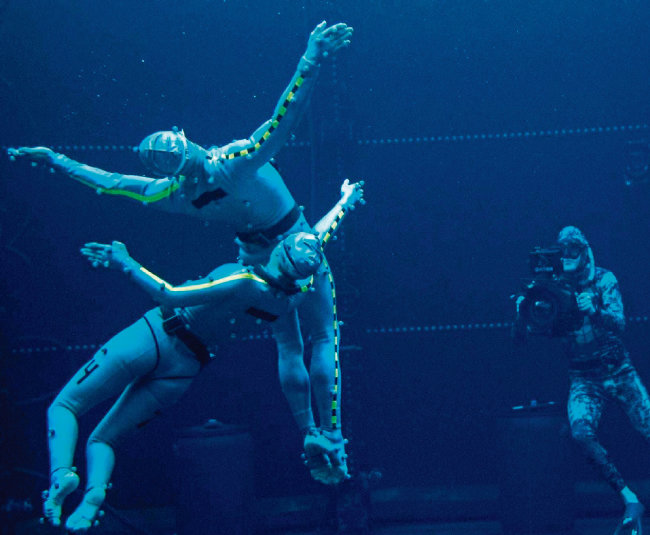 A scene from ‘Avatar 2’ where underwater motion capture is done in a huge tank of water. [월트 디즈니 컴퍼니 제공 ]

For the production of Avatar 2, there are hundreds of companies dedicated to the film’s visual effects, such as animation, 3D (three-dimensional) rendering, graphics, and motion capture. Among them, the representative company is “WetaFX” (formerly Weta Digital), a world-class visual effects company which participated in the production of “Lord of the Rings” and “Planet of the Planet of the Apes”. It’s also the company that won the Oscar for its work on “Avatar.” WetaFX has again proven to be a pioneer in the world of CG by developing several new underwater simulation patents.

Avatar 2 is praised for its advanced CG and various visual technologies. Strictly speaking, the visual technology used to create the avatar is “VFX (visual effects)”. VFX refers to the creation of images on the screen that do not exist in real life. With VFX, you can create environments, objects, creatures, and people that don’t exist in the real world. In the case of the Avatar series, which takes place on the planet Pandora, which does not exist in the real world, VFX is the primary focus.

CG is a method of VFX. It may contain artwork, artwork or digitally created components. For the film, WetaFX created 1,800 visual effects shots featuring over 800 computer-generated characters and detailed CG settings.

Since the Avatar series is to implement the virtual world and the virtual characters, the Na’vi, a more detailed visual representation is needed. For example, WetaFX traveled to the Hawaiian rainforest to study how light reflects off plants and how light falls from the sky on their faces to adjust the lighting so the Na’vi’s blue skin doesn’t look like to plastic. As a result, the green reflected light is said to have been applied with the white to correctly express the face.

Through the “Studio Binder” video production, director Cameron said, “We are aiming for a true hybrid of fully live action shooting with virtual CG and real-world characters. The reason the CG in the movie looks plausible is that some real-world elements are included in the scene to express the fake image more convincingly. If you process it with CG only, you can give it an animated feel. In this context, motion capture technology is based on real animal or human performance. Based on this, the expressions and movements of characters produced with CG can be expressed more naturally. For the motion capture in this film, the actors were filmed in a special studio wearing motion capture suits that act like a blue screen. The suit is marked with markers that reflect infrared light. To give the actors more freedom in the use of space, the production team built a motion capture studio six times larger than before. Here, detailed movements and facial expressions are filmed by multiple 3D cameras and then overlaid with digital graphics. 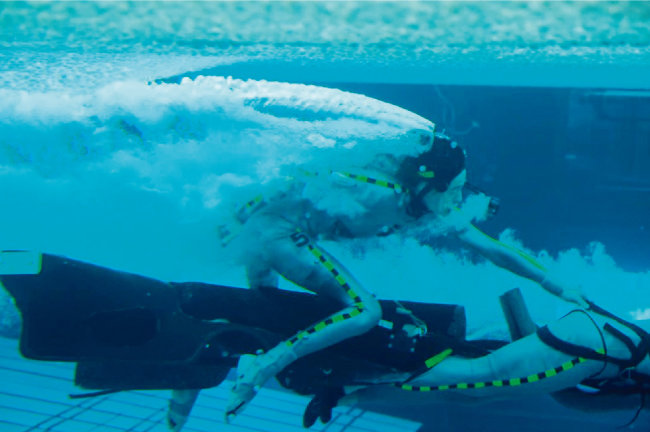 The movie Avatar, which has already been called a textbook of the latest motion capture technology, showed improved motion capture technology. The tag and track system and face capture have been further improved in this movie. In order to overcome the limitations of a single point of view using a single camera, a lot of effort has gone into shooting and tracking the actor’s face, such as using two light-head cameras. The helmet-mounted front camera takes a close-up of the actor’s face. Previously, actors had to attach hundreds of small spherical markers to their faces, but now they can capture facial reaction data in an advanced way.

As the title suggests, Avatar 2 has water in the background. Until now, most films with water in the background were made with dry-for-wet techniques. It is a method in which an actor uses a wire to act as if he is floating in water while suspended in mid-air, then draws water with CG work. Instead of having to act and film directly in the water, there is a downside that it is difficult to implement physics and realistic lighting effects to express the feeling of being underwater. . 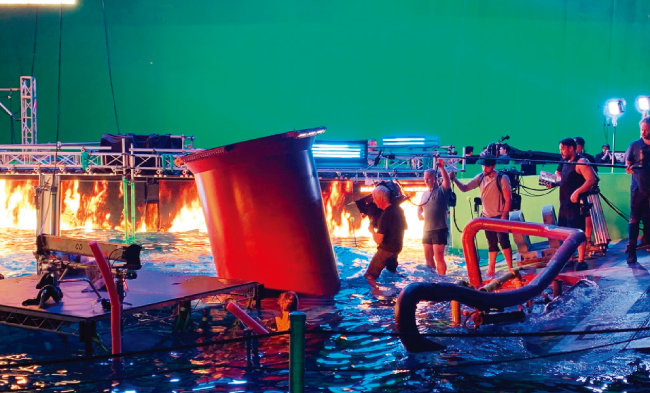 Director Cameron had to shoot underwater, which was very difficult, because the CG water didn’t look like real water. The cast of Avatar 2 went straight into the 900,000 gallon (about 3.4 million liters) water tank and performed facial expressions and gestures. It is a large tank of water specially designed to mimic the swirling currents and crashing waves of the sea. In it, underwater scenes have been drawn with high-level underwater motion capture. A lot of people and material have been mobilized here. The filming site was a gigantic organizational cooperation that had to be coordinated with the security team, the camera movements and the movement of the hydraulic system each time, since it looked like a rocket launch site.

The camera used for the underwater filming is a Sony CineAlta Venice 3D camera designed to allow filming without optical distortion. The camera meets IMAX (extra large screen Imaging) standards in terms of resolution and image quality. The production team directly designed and produced a multi-functional person-operated submersible and an underwater vehicle that operated remotely so that filming could proceed smoothly underwater. A virtual reality camera was also installed to check in real time how the digital landscape interacts with the live action. 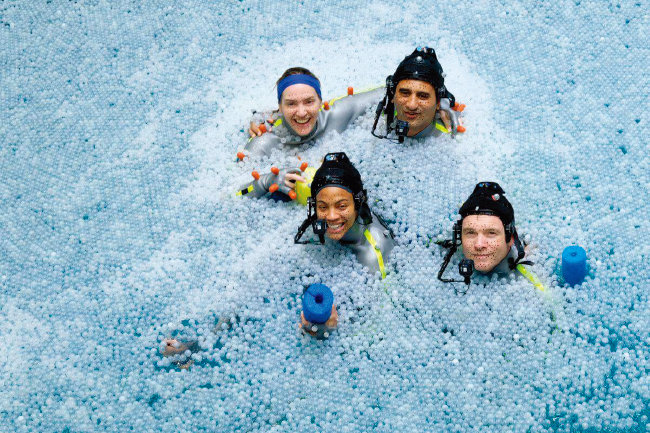 The white balls floating on the water are measures to prevent reflection. [존 랜도 페이스북]

Since underwater motion capture is my first challenge, I had to do a lot of trial and error. Filming directly underwater is a very difficult task for actors. You cannot use scuba gear underwater to get a clear capture, as air bubbles interfere with the accuracy of the sensor. The actors were trained as professional freedivers and had to hold their breath for several minutes without scuba gear. It was also a big problem that the lights shining outside the water would reflect off the shimmering surface of the water, or the motion capture suit markers would reflect in the water, creating fake brands. To solve this problem, director Cameron covered the surface of the water tank with a bead resembling a white ping-pong ball to prevent reflections. In an interview with ‘Collider’, a film-focused film site, he said: “The interaction of water and air in the tank seemed to create a moving mirror in which all the marks were reflected and reflected “, did he declare. optical problems encountered in underwater shooting. It took over a year to do that,” he said.

It was also belatedly discovered that infrared rays, a method of motion capture recognition, are absorbed by water. In water, it was changed to ultraviolet light captured by the camera sensor. Also, the performance capture system didn’t work underwater, so I created two different devices, and the tricky part was getting them to sync with each other. Indeed, if you jump into water, for example, you have to capture both above and below the surface. Kirk Craig, who worked as a freediving expert on ‘Avatar 2’, said, “Director Cameron is like Michelangelo painting with 1,500 people.” It’s a film made with a perfectionism that never stopped.”

When Salman Khan said that if Maine Pyar Kiya was his first film, it would have failed: “No Rajshri hero ever became a star”